On the Ground: Back in Kenya

I’m back in Nairobi, the iHub of mobile tech world in East Africa, after traveling by bus across most of Tanzania — gorgeous mountains for hours across Maasai land heading for Kilimanjaro. I wish I could go on one of the safaris I heard about from an Australian couple in the airport, who were transported by two weeks in the bush!

Sadly, Tanzania is seeing bigtime power shortages, since hydropower from rivers and lakes is half normal after two years of drought. (Tanzania is 30% bigger than Texas, and Dar Es Saalam has 5M, nearly the population of Rwanda.)  We had a fascinating shoot with Global Cycle Solutions. [Jodie Wu CEO is a new TED global fellow, and just back from a talk in Scotland.] Diane shot video and pix of GCS inventor Bernard Kiwia on his roof with his homemade solar water heater that gives hot water to a family of six. He makes a point of using only scrappers, so the poorest villagers could make one.  His goal to to teach workshops for those who have ideas but no tools. Now due to the water shortage, Bernard is working on a drip irrigation system for fun. Photocard and instructions come to all $10 donors! I also ordered cell phone chargers for donors, for bike and motorcycle.

I followed Jodie in training her new saleswoman, Maggie in Morogoro (3 hrs No of Dar), who outsold four other sellers combined in her first month at GCS.  She was delivering a corn sheller to a new customer who heard about them from a GCS T-shirt and bought one right away! Here’s Maggie carrying the machine in the usual way, with both Jodie and she doing business on their cells. 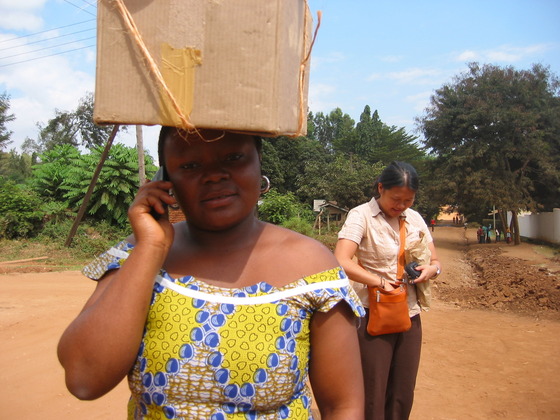 I have another chapter with Jodie making a deal with a PhD farm tools distributor who has advice for young entrepreneurs.  I will blog about the African way to do business, which involves careful socializing to test trustworthiness and amazing hospitality if you pass the test. We did and he’s going to be a big asset for GCS. 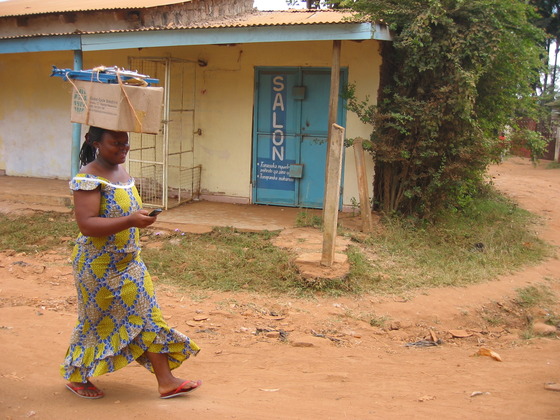 Before I shot scenes and interviews of GCS in Tanzania and with HeHe in Rwanda I had a long meeting with Open University of NL – also doing social enterprise stories in Nairobi. We could have a worldwide platform for young innnovator videos! We introduced them to iHub and MIT to inspire more young innovators.  More on this later.

These stories must be edited soon. The Agency in Rwanda who wants to help us tell one of the stories believes that one story there can inspire lots of youth in what is possible in this new mobile tech environment, and the HeHe, Ltd is a rockstar team there. We hope to show episodes on inflatable screens in the hills and made a deal with a local shooter.

Please send our link to ten friends to expand our donor community? Networking is everything, and it’s already paying off!