a note from the air 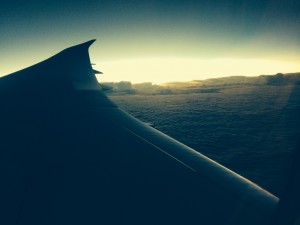 At 36,000 feet, Africa under clouds seems unknowable.  Flying from Boston to Paris to Nairobi, moving between disparate worlds and staring at the sinking sun, I’m not yet sure what hurdles I will face in tracing stories of twenty-somethings working to change lives.  Soon I’ll be dealing with them, one by one, sometimes three by three, day to day.

a note from the ground

Someone in the US asked me last week, “What is the draw in Africa?”  First, Africa is VIVID, much like the original fabrics you’ll see in markets and street corners. Africa is puzzling, much like the American South, where political argument is avoided and where authentic kindness and a desire to help typify a region with the most domestic violence.  Being authentic and outspoken as a foreigner brings authentic responses in return, as people touch your arm upon first meeting to seal a connection and to signal they like you.

A woman named Regina, who sold me a Maasai drinking bowl and earrings, told me I looked 50, like her mother, and she grabbed her breast when I said 70.  She wanted to know about my food and my activity habits.  When I talk to people in Africa, I feel more genuine and compassionate. 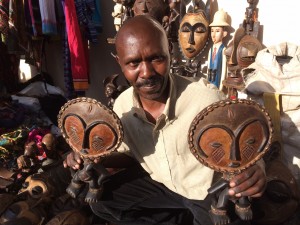 The masks I saw today from YWI inventor Bernard capture some of the cultural heritage from ancient wisdom to frivolity, earth mother love and traditional hatreds, relentless tradition and disruptive creation.  I liked especially the calm, undramatic Angola statuettes (male and female) that signify good luck, the happy couple, moving in unison, and lacking in drama.

On the other hand, it’s easy to find drama, too. Hours before I landed in Nairobi, my travel guide and friend Maurice was nearly attacked by a group of ten who appeared from the shadows when he tried to start the wrong car (while searching for his friend’s car) in a parking garage. He says his key opened the door, but not the engine. (Anything will open a car door in Africa, he says.) As he searched for the right car (same model and color), the intervention of two policemen saved him from the vigilante justice crowd, which has become customary and steps in when official justice so often fails.

Maurice could have been bloodied and hospitalized, as I stood stranded at the airport, wondering where he was. Close call, he said.

If you’d like to support these stories through post-production (video and sound editing) and distribution please contribute to our Indiegogo campaign here.